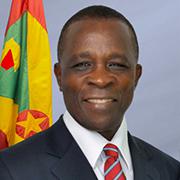 Dr. The Rt. Hon. Keith Claudius Mitchell was born to Dowlyn and Catherine Mitchell in Brizan, St. George on November 12, 1946. He received his primary education at the Happy Hill R.C. School and the J.W. Fletcher Memorial School.

In 1973 he was made Captain of the Grenada Cricket Team as well as the combined Windward and Leeward Youth Cricket Team.

He taught at the Presentation Brothers College and was a Mathematics Professor at Howard University between 1977 and 1983.

He also started his own consulting firm in Washington, D.C., and subsequently worked as a professional consultant to many Government Departments and private corporations in the United States.

In 1984, he was elected Member of Parliament for St. George North West, and has held the seat in each subsequent election. Dr. Mitchell was elected Political Leader of the New National Party (NNP) in 1989 defeating Prime Minister Herbert Blaize. He served as Minister of Communications, Works and Public Utilities, Cooperatives, Community Development, Women’s Affairs and Civil Aviation from 1988 to 1989 in the New National Party (NNP) Government.

On June 20 1995, Dr. Mitchell successfully led the party to victory in the 1995 general elections winning eight out of fifteen seats in the House of Representatives; Dr. Mitchell took office as Prime Minister, along with his Cabinet, on June 22, 1995.

In the 1999 election, Dr. Mitchell led the New National Party to an unprecedented victory, winning all 15 constituencies and being the first Prime Minister since Independence to win two consecutive general elections. His portfolio included Minister of National Security, Finance, Trade, Industry, Planning and Information and later on National Security and Information.

Dr. Mitchell led the Party to another unprecedented but narrowly won election on November 27, 2003, when the Party was elected to a third consecutive term in Office. He held the portfolios of National Security, Human Resource Development, Information, Information Communication Technology (ICT), Business and Private Sector Development and Youth Development. Her Majesty the Queen appointed him to the Privy Council on February 20, 2004.

The New National Party was defeated in the general election held on July 8, 2008 by the National Democratic Congress (NDC), winning only four seats against 11 for the NDC. Dr. Mitchell himself was re-elected to his seat for St. George North West and continued as NNP leader. He was sworn in as Leader of the Opposition on July 16, 2008.

On February 19thth, 2013, Dr. Mitchell and his New National Party defeated the incumbent Tillman Thomas and the National Democratic Congress, winning all 15 Seats- the second time he and his party achieved such a historic feat.

On February 20th, 2013, Dr. The Right Honourable Keith Mitchell was sworn in as Prime Minister, for the fourth time.

Copyright © 2017, Ministry of Finance and  Energy Grenada. All Rights Reserved.